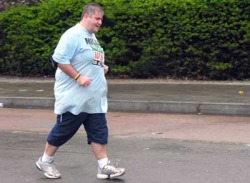 It seems that I have the same conversation about ten times a month. A new runner says: “I decided to start running so that I could lose weight, but I haven’t lost any. Is that normal?”

Yes, in fact, it is quiet common for new runners not to lose weight when they start running. In fact, a lot of them gain weight. Here’s why.

A running program will provide a number of great benefits to you. It will increase your cardio-vascular efficiency, making your heart stronger and more efficient. It will also increase your basal metabolic rate, helping you burn more calories when you’re at rest. And running itself burns calories at a rate of about 115 calories per mile. But all of this together does not automatically lead to weight loss.

The reasons are three-fold:

First, your weight is directly related to your diet - The foods you consume will either be burned by your activities during your day or they will be stored as fat for you to use later. There is no other option for those calories - they have to go somewhere. Generally speaking, when people are over-weight they are eating too many calories, or more specifically, too many calories from food types that are not useful to them for the activities they pursue in their daily lives.

Running requires foods rich in complex carbohydrates. If these carbohydrates are available in the runner’s diet, they will be burned to as fuel. Runners don’t lose weight, because they are often eating too much fat and protein on top of the carbohydrates that they need for their running.

Second, new runners often have a greater appetite than before they started running- With the body burning more calories, it is normal to be more hungry and craving more food. The problem is that new runners may not have figured out which foods to increase in their diet and which to avoid. This often means they may just eat more of the foods that they don’t need, which works against their desire to see weight loss from their running.

I often hear runners say things like, “hey, the reason I run is so that I can eat whatever I want!” Unfortunately, it doesn’t work that way. Runners still need to eat sensibly to avoid gaining weight. They may be burning more calories, but they are not gaining a license to eat whatever they want.

Third, new runners often gain muscle when they begin their running program- Since muscle tissue weighs more than fat, some new runners may actually gain weight when they initially start a running program. But the flip-side of this is that as their bodies start to respond to the training, they often feel stronger and have more energy.

I’ve noticed with my female runners that they often put on new muscle in their legs, in particular their quads (the large muscle in the front of your legs). They often tell me that their jeans are snugger than they have been in the past — again, I think this is normally the result of larger muscles in their legs — and that their bathing suit bottoms don’t fit particularly well. (As you can imagine this doesn’t make me that popular around the start of Summer!)

Another thing that I’ve noticed is that as the distance of their weekend long runs increase, most runners will tend to lean out in their mid-sections. This is simply because of the greater number of calories that are being burned by these long runs. So when new marathon runners start hitting about 15 miles in their weekend runs, they start burning enough calories and even if they aren’t eating particularly well, things start to balance themselves out. Their stomachs start to get flatter and their pants fit more loosely around the waist.